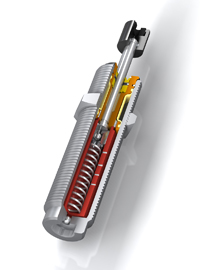 Like most packaging systems, PET blow molding machines need to run continuously at high speeds. Excess shock and vibration, however, can put the brakes on productivity.

One way to combat the shock and vibration loads in blow molding machines is the use of shock absorbers to cushion the closing mold and the reciprocating rod that stretches the bottles. 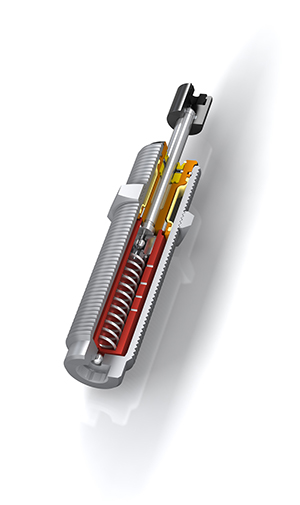 Recently, ACE Controls created a new type of shock whose size and damping characteristics are tailor-made for use on the most common types of PET blow molding systems.

ACE’s new PET Shock Absorbers are used on both the molds and stretch rods of carousel blow molding machines—such as those from Sidel® and Krones®. These fast, efficient machines can achieve about in excess of 2,000 cycles per hour.

In this high-cycle operating environment, standard shock absorbers typically last only two to three months before failing. ACE’s PET shocks, by contrast, can last for 20 million cycles or about a year of operation. ACE achieves this long life by managing both the high forces and heat found within a blow molding machine.

Tolerates high forces, resets quickly. Forces from the closing mold, for example, can be substantial, and the ACE PET shocks have a short-stroke design that can dissipate up to 1.8 million in-lb of energy per hour and tolerate impact velocities as high as 12 ft/sec. The shock also features a relatively large oil chamber—filled with food grade lubricant—which also helps improve cycle life.

Copes with the heat. In addition to a heat-dissipating aluminum body, the ACE PET shocks feature a proprietary elastomer seal that can withstand temperatures to 300ºF and an accumulator rated to 225ºF. Conventional shocks use seals that top at 150ºF and tend to fail prematurely when exposed to the high heats within a typical blow molding machine.

Poorly performing seals represent a major cause of shock absorber failure. Whether degraded by heat or wear, a failing seal can cause shocks to lose oil or ingest air. The resulting dead spots within the shock reduce energy absorption, sometimes to the point where the shock needs to be replaced.

Fast Install. Blow molding machines use shocks in several locations – each with different reaction forces. Whether used for the stretch rod or the clamshell closure, the ACE PET shocks have been color coded to make it easier for technicians to identify and replace worn parts with the correct shock. Additionally, a female hex end speeds installation and removal.